This week ends with the bicentenary of Peterloo which took place on St Peter’s Fields on 16th August 1819. The events of that day are well known to Mancunians. A crowd of 50,000 or more came to listen to the Orator Hunt who spoke on the subjects of equal rights, universal suffrage, parliamentary reform and an end to child labour. The day turned into tragedy when the Yeomanry attacked the crowd resulting in 18 dead and countless hundreds injured.

It was to be the final time that the army were to use arms against its own population in this country. And whilst one can be viewed as an occasion to many, in an era of tumult, it should be viewed as an exception of an era.  From thereon the age is dominated by a development of ideas and a new industrial civilisation.

From the fields upon which the people of Manchester were heinously cut down grew a Radical city. Not only was Manchester the first industrial city in form, but its people developed the cultural and intellectual hinterland of it. Manchester was not to be a city that was to be dictated to by the established ruling class, but to be a city which was to lead the world in how to think in a new industrial world.  The modern quote ‘what Manchester does today, the world does tomorrow’ echoes and resonates in the past.

Economically weakened through the costs of the Napoleonic War which had ended at Waterloo in 1815, unnerved by the impact of the French Revolution which unleashed the forces to topple the established monarchical order and overburdened by the birth of the industrial era, Georgian England was close to a nervous breakdown through extreme internal and external pressures.

Even if the nation were well governed the pressures would have been extremely challenging. But the country was ill led. The poet Shelley imbued with the French Enlightenment spirit described in his poem ‘England in 1819’ the monarchy as ‘Princes, the dregs of their dull race, rulers who neither see nor feel nor know, but leechlike to their fainting country cling’ and Parliament, ‘…. a senate, Time’s worst statute, unrepealed.’

The revolutionary tensions created from above and below were rising. The tensions marked by the suspension of habeas corpus leaving the state unchecked in its detention of citizens.

The writer would argue that it is false to view the present as inevitable or history as a constant process of improvement. Would one know whether a description of a parliament as unrepresentative of popular opinion as being of 1819 or 2019? The possibility of politics without democracy is omnipresent throughout the ages whether universal suffrage exists or not. But the shock of Peterloo reverberated to unshackle its society from an inihibited state and unleashed a purpose and energy that would endure for decades.

So much of Manchester was suppressed. It was a city without representation in Parliament and in any case if you were a woman, a Roman Catholic or a Nonconformist neither office, attending university nor voting was for you. In Manchester, more than 10% of the population was Irish Catholic and the Non-Conformist community found employ in industry rather than politics, the professions or other offices which were proscribed to them.

The Unitarian Chapel on Cross Street was a hotbed of ideas and movements in the city. Its congregation included figures such as Benjamin Heywood, a banker and founder of the Manchester Mechanics Institute (which became UMIST) aimed at educating working men to learning the principles of science, the author Elizabeth Gaskell and the engineer William Fairburn.

These figures who were freed by the principles argued for in Peterloo began to shape society. The baton was also picked up by figures such as Richard Cobden and John Bright whose Anti Corn Law League fought against the hegemony of the agricultural ruling classes. Manchester became a voice for Free Trade rather than protectionism and withstood hardship in the Cotton Famine of the mid-nineteenth century to stand against slavery in the Unites States of America.

In the commemoration of Peterloo it is very difficult to conjure in one’s mind the people and the place. We sit at the other end of urbanisation which the people of that time were entering but the issues and demands of the day resonate and it is in them that we can find ourselves as kindred spirits with those who have passed. In them we find this City.

“Rise like lions after slumber In unvanquishable number Shake your chains to earth like dew We are many, they are few” Shelley - The Mask of Anarchy: Written on the Occasion after the Massacre at Manchester 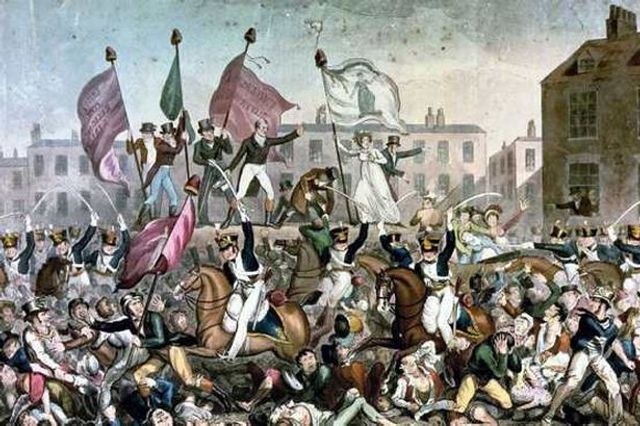 Peterloo marked a moment when the British state turned on its people. It was a decisive move, designed to bring popular protest to an end once and for all. 200 years on, these five books look at its legacy https://t.co/2SEbhJNisY

"The wicked have drawn out the sword, they have cast down the poor and needy and such as be of upright conversation."

Peterloo: The Massacre That Changed Britain.https://t.co/tiEstcHpjT

Sharing this ahead of August 16 and the 200th anniversary of #Peterloo
This film was made to help people understand the context of Peterloo within today's city and where you can find out more. Retweets welcome.
Full film here: https://t.co/CwjhWEGJHV#Peterloo2019 #Peterloo1819 pic.twitter.com/lvpaoN2vRZ

Over the next week we'll be continuing to commemorate the Peterloo Massacre.
Today's #MPMonday is Henry Hunt who, as a radical orator, was invited to address the crowds at St Peter’s Field in what became #Peterloo. He went on to be MP for Preston 1830-2.#Peterloo2019 pic.twitter.com/5ZM7FrFAeU

How to Move a School: Lessons on a Right of a Reverter
Brabners