It’s Charity Fraud Awareness Week and to mark its beginning today the Charity Commission has published the results of “Preventing Charity Fraud Insights + Action”: the biggest ever sector survey – of 15,000 registered charities across England and Wales - analysing fraud committed against charities.

The survey may have been big, but the report is short and sweet, no doubt to focus on the key message that everyone must play their part in the fight against charity fraud and to start acting in the right way, not to assume that fraud will only affect others.

A startling finding is that while over two thirds of charities think fraud is a major risk, less than 9% of charities have a fraud awareness training programme in place.

All charities are encouraged to demonstrate commitment to taking proportionate steps to protect themselves from fraud and financial abuse, by adopting Tackling Charity Fraud – Eight Guiding Principles.

The Head of Counter Fraud & Cyber-Crime at the Charity Commission will summarise the report’s findings - and the simple steps charities can take to prevent fraud occurring - for a Manchester audience at Brabners’ King Street office from 3pm this Thursday 24th October.

There is limited availability so book your place now to avoid disappointment!

News story International Charity Fraud Awareness Week 2019 Get involved between 21 and 25 October to help your organisation and the charity sector become more resilient to fraud. 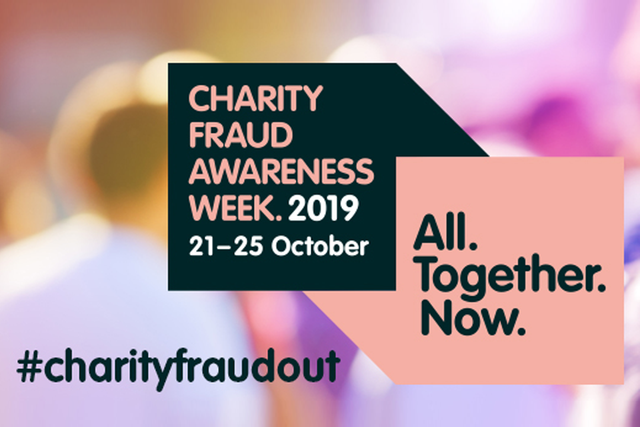 International Charity Fraud Awareness Week has arrived in the UK! Access free information, guidance and webinars on the Hub: https://t.co/Y2fbWHwAtm

It's Charity Fraud Awareness week – lots of helpful resources to help you prevent, detect or respond to fraud committed against your organisation here ➡️https://t.co/U8kX2DZN1v #CharityFraudOut https://t.co/2dhsIc28pu

Today marks the start of Charity Fraud Awareness Week. Find out how you can get involved and help protect your charity here: https://t.co/dql8TaA9Zv . #CharityFraudOut pic.twitter.com/OhMJERG4ue