Among the many uncertainties facing charities and their trustees at the moment has been the question as to the circumstances in which a charity might be required to make a serious incident report to the Charity Commission as a result of steps taken or actions required by the Coronavirus pandemic.

To recap, the serious incident reporting regime requires charities to make a report to the Commission where an adverse event (actual or alleged) occurs which results in or risks significant:

- harm to a charity’s beneficiaries, staff, volunteers or others who come into contact with a charity through its work;

- loss of a charity’s money or assets;

- damage to a charity’s property;

- harm to a charity’s work or reputation.

The term “significant” is described by the Commission as meaning significant in the context of the charity concerned, taking account of its staff, operations, finances and/or reputation.

The particular queries that we have been dealing with at Brabners have centered either around a charity's decision to close or a charity effectively being forced to close as a result of the Government's announcement earlier this week.

A couple of weeks ago, prior to the real escalation of the Coronavirus crisis in the UK, the Commission published a guidance note and an accompanying comment stating that “the virus may result in your charity needing to report a serious incident” and that if a charity stops all or a significant part of its work due to Coronavirus,  the Commission would expect this to be reported on the basis that this would have a significant impact on a charity's operations and cause serious harm to the charity’s work.

This supplemental guidance note was subsequently withdrawn with the Commission acknowledging that it "was not as helpful as we would have liked" and the Commission's current position is as set it in the quote below, i.e. charity's should use the current guidance.

Our view, to be frank, was that we could not see any point in a charity reporting either a decision to close and / or cease operations prior to the lockdown being announced or a closure imposed by the announcement of the lockdown.

Thousands of charities up and down the country are in the same boat. Theatres, museums and art galleries, charities running visitor attractions, independent schools, community centres have all been required to close their doors and shut off the most significant part of their operations for what at present is an undetermined period of time.

In normal circumstances this would be a serious incident that would require a report to be made but, as we are all aware, the current circumstances are far from normal.

I have spoken to the Charity Commission this week and whilst the Commission was reluctant to offer its specific view, it was confirmed by  the Regulator that the decision as to whether or nor a serious incident report needs to be made is one for the trustees.

Our view remains the same: That there is no obvious point / benefit / purpose served in making a report to the Commission where a charity has closed as a result of the Coronavirus crisis. There may be circumstances where a report becomes necessary, e.g. where a solvency issue arises but for the moment, where the incident is simply the temporary closure of the charity it would be a unnecessary use of the charity's resources to make a report.

As noted in my previous blog, if any charity trustees, charity employees or volunteers have any questions please do feel free to get in touch.

We appreciate that during the coronavirus pandemic the charity sector will face extremely demanding and ever-changing challenges. Charities’ primary interest, and ours, must be looking after the public and the communities that we serve. It is ultimately the responsibility of the charity trustees to continue to report serious incidents using our current guidelines, and we will continue to ask trustees to use their judgement in deciding whether an incident is significant in the context of their charity and should be reported to us. We will continue to prioritise those incidents that place individuals at risk, or incidents that have had a significant impact on a charity’s operations and therefore serious harm to the charity’s work. 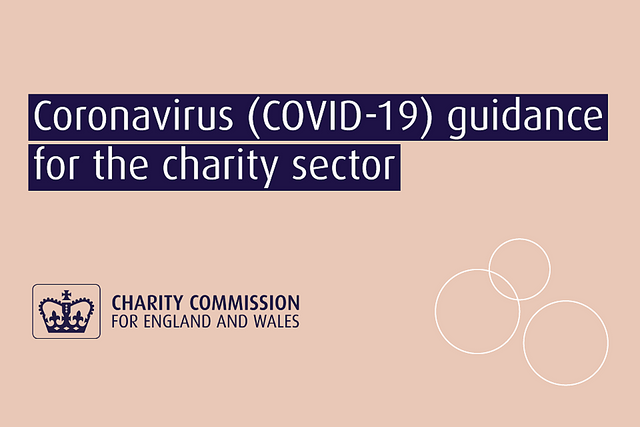 Please click on the link below for valuable information on support for the charity sector during this uncertain time.https://t.co/uQPLLT7B0c pic.twitter.com/SqZL5ynWd4

Government guidance is available for charitable groups, regarding help with running your charity during the Coronavirus (COVID-19) outbreak.

If you're a charity concerned about what to do during the Coronavirus (COVID-19) outbreak, @GOVUK have responded to the most commonly asked questions.

Essential reading for the #SocEnt and #ThirdSectors here ⬇️

The Government outline their "flexible and pragmatic" approach for charities during the Coronavirus (COVID-19) outbreak.https://t.co/EP7ODERcxq pic.twitter.com/NfGDD7ggQQ

#Coronavirus (#COVID19) guidance for the #charity sector from @ChtyCommission https://t.co/XfBr4n0H3T